The Expert Imaging and Sound Association is the community of 60 technology magazines, websites and social media commentators from 29 countries, specialising in hi-fi, home theatre, photo and video, in-car and mobile electronics. Every year the EISA jury of experts rewards the best products in each class with a coveted EISA Award. This commemorative 40th anniversary of the EISA Awards has Earmen proudly receiving the award for “Best Headphone System” for their Stack, which is a headphone system with CH-amp headphone amplifier, Tradutto D/A converter and Staccato Network player.

The independent jury from EISA found the Earmen Stack to be: “By offering a ‘stack’ of four discrete units in finely crafted aluminium housings and each dedicated to their particular role, EarMen has created a brilliant standalone solution for headphone lovers to stream. The Staccato is a slimline streamer controlled by a user-friendly smartphone app, which sends hi-res audio to the fully balanced Tradutto DAC. The CH-Amp preamp/headphone amp continues the fully balanced ethos, and has the capability to power even the most demanding of head gear. Each EarMen component can be used separately, but it’s when they’re put together and powered by the triple-output power supply unit bundled with the CH-Amp that you get a high-performance system that really shines.” 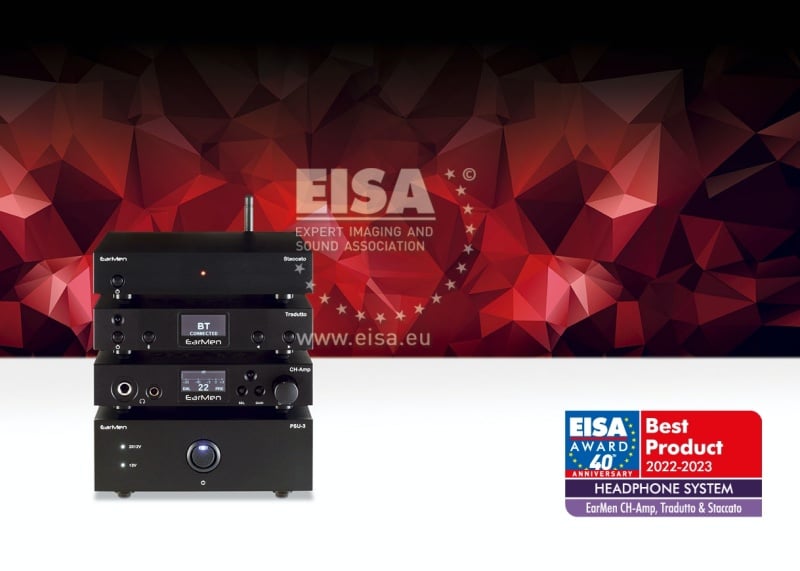