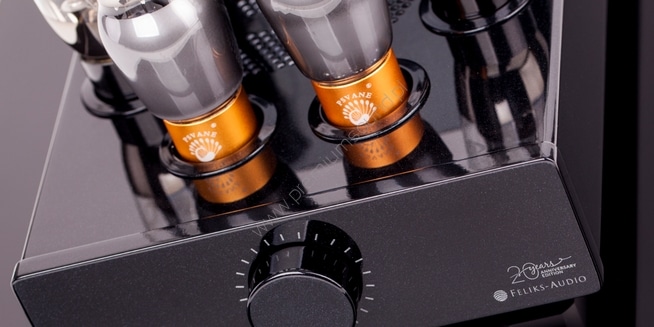 The Feliks Audio Euforia 20th Anniversary Edition is the top of the range amplifier in the product line-up. This special edition joins the original Euforia which was launched back in 2017. Beautiful hand-crafted single ended OTL amps based on 6SN7 tubes and 6N13S (6AS7) power tubes. This amp has 250 mW power output, one RCA input and one RCA line-out output.

Headfonia always guarantees an in depth detailed review and this is no exception. Next to the technical aspects and more information on the tubes, reviewer Lieven does comparisons with the original Euforia.  He also listens with various headphones, such as Sennheiser HD800, Focal Utopia and Beyerdynamic DT1990PRO (2500 ohm).

“Presentation-wise the Euforia AE is tuned more neutrally but with a smooth tube delivery and an extremely high level of musicality. Key characteristics when listening to the AE are: timbre, extension, spaciousness, detail and speed. The sound stage is wide and deep, it extends well both in bass and treble and the layering and transparency from top to bottom is exemplary”

In the end Lieven also pairs the Feliks Audio Euforia AE with the HiFiMAN Susvara. Although on paper driving the Susvara, who needs lots of power, should not be that easy. Just turning the volume knob up and the magic happened.

“Full bodied sound, great sound stage width, excellent depth, precise layering and positioning. The combo is magical, the AE seems to do everything right for the Susvara and the tubes make everything musical”

The review of Headfonia ends with a well deserved place on the recommended component list and a 4,5/5 star review.

Headphonics really concurs with the review from above and awards the Feliks Audio Euforia 20th AE with a 9.2/10 score and Michael calls this amp something truly extraordinary.

“I regard the Euforia 20th experience as the literal best I have ever heard, in fidelity and quality factor, for this price range.  I consider the Burson Conductor 3 exceptionally good, as it is both DAC and Amp.  But there is quite a leap in liquidity and velvet lusciousness in stepping into the Euforia 20th”

Michael also pairs the Feliks with the Sennheiser HD800 and says in this review that he has not been this happy with rig pairing with the HD800 in a long time. Wonderful in every way.

“The reason is that the Euforia 20th sounds like the audio version of a widescreen effect.  It is noticeably wider than tall and very deep sounding”

It is highly recommended to read both Headfonia and Headphonics review of this Feliks Audio AE headphone amplifier. Well written and compliment each other perfectly.